Reasons to Love Britain in 2022

NEW YORK, Jan. 25, 2022 /PRNewswire/ -- From landmark royal anniversaries and the return of favorite annual festivals to an exciting line-up of new transatlantic airline routes and hotel openings, there's a whole host of reasons why Britain is brilliant in 2022. Major events drawing global attention this year include Her Majesty The Queen's Platinum Jubilee, marking 70 years since her accession. Public events over Platinum Jubilee Weekend (June 2-5) will be the focal point, however this momentous occasion will also be marked with special experiences and exhibitions throughout the year, such as the Tower of London's Superbloom display, the Platinum Jubilee Display at the Palace of Holyroodhouse and the reopening of The Royal Mews, showing The Queen's carriages, cars and horses.

Visitors can also look forward to UNBOXED: Creativity in the UK, a series of ten free large-scale events and installations across the country promoting the UK's creativity and innovation to the world. With live and virtual components, brought together by some of the brightest minds in science, arts, culture and technology, these immersive experiences can't be missed on a trip to Britain this year. Look out too for the Birmingham 2022 Festival, a six-month cultural program of art and community-led projects starting in March to celebrate creativity across the West Midlands as Birmingham prepares to host the Commonwealth Games this summer.

These come in addition to the return of many favorite annual events like the Chelsea Flower Show and the Hay Festival in May, Royal Ascot in June, LGBTQ+ Pride parades in various cities, the 150th Open Championship at St. Andrews in July and the Edinburgh International Festival and 75th annual Festival Fringe in August.

"We know over the past few years there has been a pent-up demand for Americans to travel, and with this year's major events and celebrations on deck, there's no better time for US travelers to book their next trip to Britain. We are excited about everything that is on offer in 2022 and are ready to share these experiences with all our visitors. We look forward to safely welcoming them back to explore our dynamic cities, coast and countryside."

Direct flights from across the US make it easy to fly into British hubs like London, Manchester and Edinburgh. Airlines continue restoring service to return to pre-pandemic levels, and many have announced new transatlantic routes to offer even more ways to get to Britain in 2022. JetBlue, who recently launched service connecting New York's JFK with London's Heathrow and Gatwick, will launch from Boston this spring. Aer Lingus' new transatlantic service connects New York's JFK and Orlando to Manchester, plus Virgin Atlantic has announced a new flight connecting Austin, Texas to London in May and British Airways will launch service connecting Portland, Oregon to London in June.

Here are even more reasons Americans will want to book their next trip to Britain in 2022:

CHECK OUT WHAT'S NEW IN OUR CITIES
Britain's cities are buzzing with world-class culture and attractions, and 2022 is a great opportunity to discover a new side to the destinations we know and love.

London's major new attractions include Outernet London, an immersive media and entertainment center with dining, accommodation and performance venues opening in March, and ABBA Voyage, featuring virtual versions of ABBA performing in the new ABBA Arena. Other exhibitions not to miss include Titanic: The Exhibition, Beatrix Potter: Drawn to Nature at the V&A and Surrealism Beyond Borders at the Tate Modern.

Visitors to London will be excited by the reopening of the West End as many favorites such as Dirty Dancing, Six, Hamilton and Back to the Future: The Musical return to the stage, and even more exciting are the shows making their debut in 2022. Coming this year are The Glass Menagerie with Amy Adams, Prima Facie with Jodie Comer, Cabaret with Eddie Redmayne and a new stage adaptation of Life of Pi.

In 2022, Manchester Museum will add a South Asia Gallery and a new China Gallery, and infamous music venue Band on the Wall will reopen following renovation. The Factory, billed as North England's new flagship cultural venue, is set to open in late 2022 in St. John's, Manchester's newest buzzing neighborhood and cultural center.

Nearby in Liverpool, new exhibitions such as The Tudors: Passion, Power & Politics, Doctor Who: Worlds of Wonder and Radical Landscapes and the Turner Prize 2022 at the Tate Liverpool are sure to delight, while this year's grand opening of The Shakespeare North Playhouse in Prescot will complete England's "Shakespeare Triangle," adding a Northern counterpart to Shakespearean attractions in London and Stratford-upon-Avon.

EXPLORE THE OUTDOORS
Step into a world of natural beauty and culture along Britain's coastal paths. The Wales Coast Path, stretching 870 breathtaking miles along the entire coast of Wales, marks its 10th anniversary this year. Additionally, the England Coast Path, tracing 2,795 miles along the English coast, is closer than ever to being connected in full. Visitors can explore pieces of it in coastal cities like Brighton, Bristol and Liverpool, then wander further to discover white sand beaches, sea-to-table cuisine and unforgettable views along the world's longest continuous coastal walking path.

Starting in March, visitors to Glasgow can head to the city's largest green space, Pollok Country Park, to visit the newly refurbished Burrell Collection. Housing one of the world's greatest personal collections, the new gallery spaces feature a low-carbon design and will display objects from Europe and Asia representing five millennia of art and history.

A TASTE OF WHAT'S COMING
Fans of British spirits can take their whisky to new heights this summer at Port of Leith Distillery, Scotland's first vertical distillery offering panoramic views from their top floor whisky bar, or head to the new visitor center at Eden Mill, set to become one of Scotland's first carbon neutral whisky distilleries. In Cardiff, visit the new Hensol Castle Distillery and gin making school or stop by Cooper King Distillery in York to sip some of England's first carbon negative gin.

Luxury hotel brands, eco-friendly accommodations and unique, boutique properties are set to expand Britain's hospitality offering this year. Raffles makes its London debut in the iconic Old War Office on Whitehall, while the new Broadwick Soho draws design inspiration from the history, glam and grit of Soho. Edinburgh will welcome the Gleneagles Townhouse, the iconic country estate's first urban outpost, as well as the W Hotel in the new St. James Quarter and 100 Princes Street from Red Carnation Hotels. Virgin Hotels will open locations in Edinburgh and Glasgow, while The Albion promises to be one of the most exciting new openings coming this year to Wales.

For more information and even more reasons to travel to Britain this year, visit: www.visitbritain.com/us/en/media 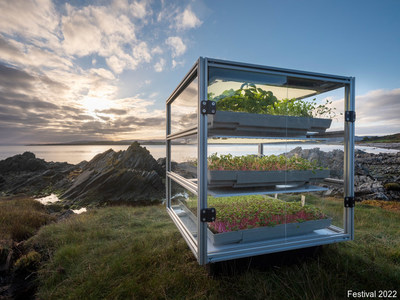