June 1st marks the official start of the Atlantic Hurricane Season. While June is historically one of the calmest months of hurricane season, storms do occur in and before June. For example, we’ve already seen Tropical Storm Ana form over the northern Atlantic. The next storm to form in the Atlantic Basin will be named Bill.

While the frequency of June storms is relatively low, there are two areas in the Gulf of Mexico where development is historically favored. One area is particularly important to us here in East Texas. You’ll notice that storm systems that develop in the western gulf usually make landfall along the Mexico or Texas gulf coasts. A storm that made landfall along the Texas coast would likely result in rain chances for East Texas.

The orange circle is a more favorable area of development in the June (Eastern Gulf). Storms that develop over the Eastern gulf will usually impact the coasts of Florida and the Eastern United States.

While, June may not be our most active month of the season, things do pick up in the following months. The majority of tropical storms and hurricanes occuring during August, September, and October as seen below.

Both Colorado State and the National Oceanic and Atmospheric Administration (NOAA) are forecasting for above-average hurricane seasons. NOAA is forecasting 13-20 named storms with 6-10 hurricanes. 3-5 of these hurricanes could be major hurricanes with a category 3 rating or higher. The NOAA projection gives us a 60% chance of having an above-average season. La Nina is forecasted to lead to warmer water temperatures and wind shear is expected to weaker than normal which will prevent storms from breaking apart.

While East Texas isn’t along the coast, it’s important to note that we can get the inland effects from hurricanes. This can include heavy rainfall, damaging winds, flash flooding, thunderstorms, and even isolated tornadoes. 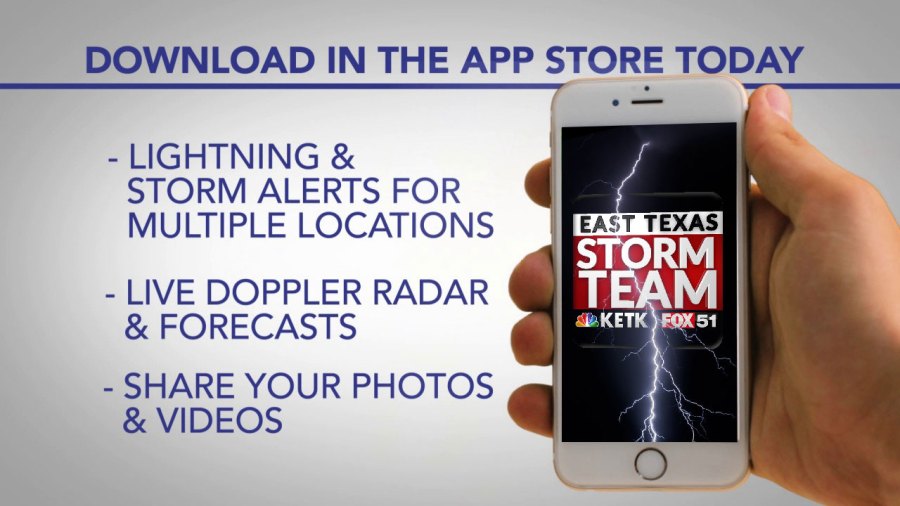 Take a moment to download the East Texas Storm Team app. You can view Futurecast, and set up custom alerts for multiple locations. You will be notified of lightning and storm alerts, rotating storm threats, and custom messages from your East Texas Storm Team. Download for Apple and Android devices. Also, have a secondary way to receive weather information, like a NOAA Weather Radio.

Friday they were in the Piney Woods hosting a camp for high school players.

TYLER, Texas (KETK) -- The latest analysis of Tyler Water Utilities drinking water shows the city met clarity requirements for water quality and contaminants were within the ranges set forth by the Environmental Protection Agency.

The water is under the maximum contamination level for 46 measurable factors or parameters. Additionally, TWU conducts more than 252,000 water quality tests every year, according to the report.

TYLER, Texas (KETK) -- Work has begun on a $28 million construction project that will transform the Tyler Rose Complex and includes the building of a new city convention center.

Workers have begun installing a parking lot for those using Tyler Civic Theater and Rose Garden Center, both are located on the west side of the complex, which runs along a portion of West Front Street and includes the East Texas State Fairgrounds and adjacent properties, such as the Tyler Municipal Rose Garden.

18-wheeler overturns on I-20 in front of Splash Kingdom

Friday Night Forecast: Tracking the tropics for the weekend

TDCJ: Moving prisoners out of Briscoe Unit to make room for undocumented migrants